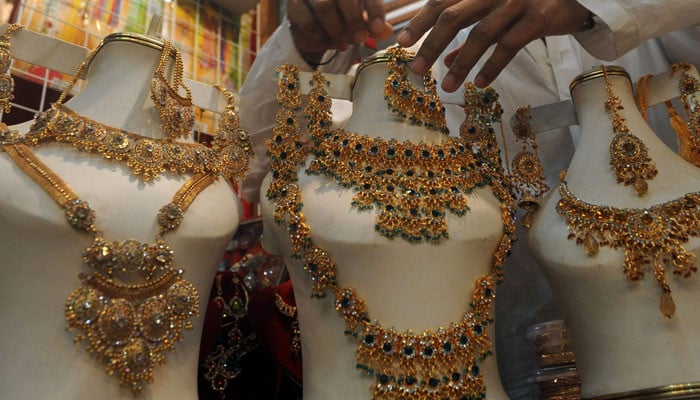 
The gold price soared to a record high at Rs167,300 per tola (11.66 grams) in Pakistan on Saturday. The surge was in line with the fluctuations in rupee-dollar parity that pushed the prices of precious metals up significantly.

According to data released All Pakistan Sarafa Gems and Jewellers Association (APSGJA) showed the prices of gold rose by Rs200 per tola and Rs171 per 10 grams to settle at an all-time high of Rs167,300 and Rs143,432, respectively.

A day earlier, the gold price settled at a record high of Rs167,100 per tola as people took refuge in the safe-haven metal on mounting concerns that the nation’s economic conditions will deteriorate further.

The gold rally is more striking because the precious metal generally tracks global prices, which have come under pressure this year due to the US Federal Reserve’s aggressive tightening measures.

In the international market, gold price fell below the key psychological level of $1,800 per ounce after a decline of $3 per ounce settling at $1,797.

Gold dealers, however, lament that since gold prices were touching new peaks in the country, it had seized to exist as a lucrative business in the country.

Only investors are investing in gold here. Otherwise, artificial jewellery is being used in marriages and other ceremonies.

It should also be noted that gold demand in Pakistan jumped 34% to 13 tonnes during the period of July and September 2022 from a year earlier, Bloomberg reported Wednesday citing data compiled by the World Gold Council.

The data revealed that this was the most amount of gold purchased during a quarter in at least about three years.