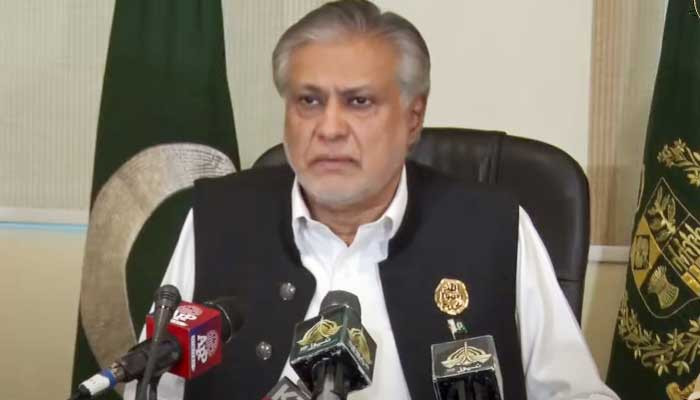 
ISLAMABAD: In a bid to provide relief to the business community, Finance Minister Ishaq Dar Sunday announced that the pending payments of letters of credit (LCs) worth $50,000 will be cleared this week.

Addressing a press conference, Dar revealed that the decision to provide relief has been taken after consultations with the State Bank of Pakistan (SBP) Governor Jameel Ahmed.

The finance minister said that next month, before leaving for Washington to meet the International Monetary Fund (IMF) officials, the SBP chief will pass on these instructions to clear LCs as a “first step” towards growth.

He revealed that a total of 7,952 cases were pending and after these decisions, nearly 4,400 requests of opening LCs —a payment mechanism used in international trade to provide an economic guarantee from a creditworthy bank to an exporter of goods — will be subtracted.

Earlier, the SBP required prior approval before the opening of LCs or registration of contracts for certain types of imports like cars (CKD), cellphones, and some types of machinery. But these instructions were issued on May 20 and not today.

‘Will not seek assistance from Paris Club’

Regarding Moody’s decision to downgrade the Government of Pakistan’s local and foreign currency issuer and senior unsecured debt ratings to Caa1 from B3, Dar said the ministry has submitted a detailed reply to the report and has addressed all reservations highlighted by the rating agency.

“The major reason behind this negative outlook was the speculations that Pakistan was planning to seek help from bilateral Paris Club creditors,” he said, adding that Moody’s thought that Islamabad was aiming to get its loans from World Bank and the Asian Development Bank, etc., rescheduled.

The finance chief reiterated that after consultations with Prime Minister Shehbaz Sharif, it has been decided that Pakistan will not seek assistance from the Paris Club.

Dar further assured the markets that Pakistan’s next big payment — $1 billion in international bonds — which is due in December, would “absolutely be met on time.”

Meanwhile, the conditions agreed with the International Monetary Fund (IMF) will also be fulfilled.