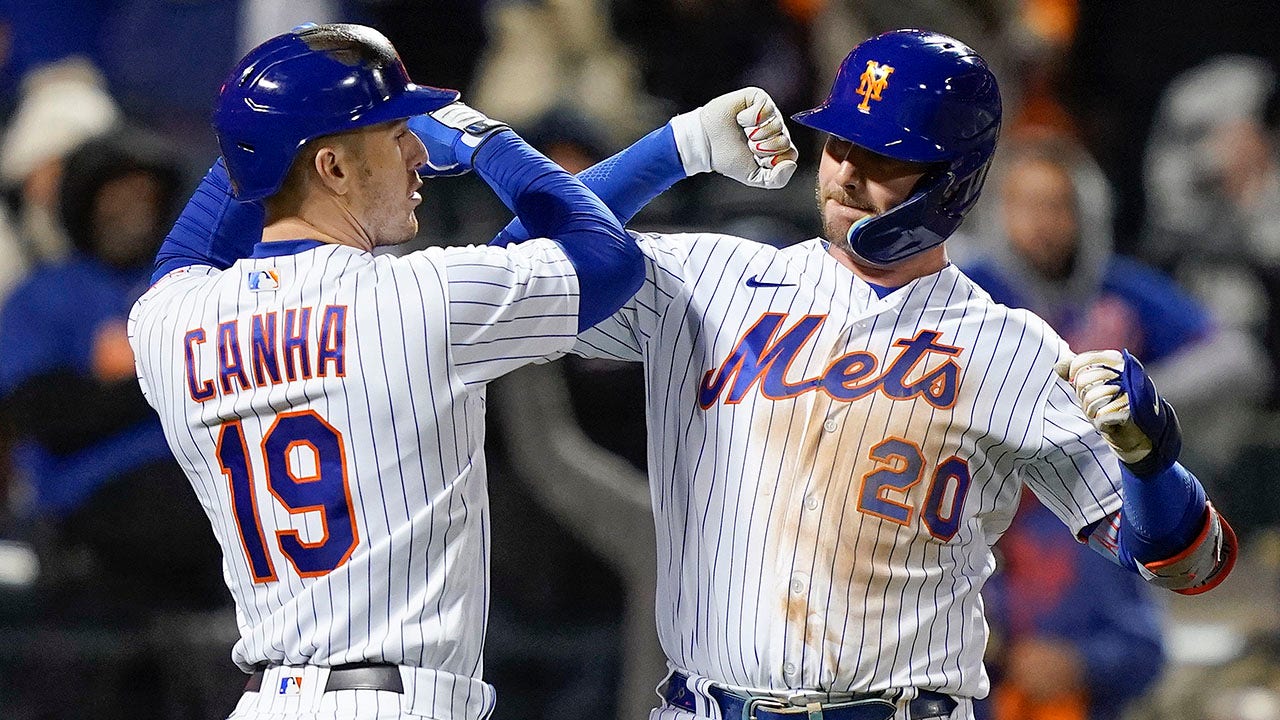 
With their season on the brink, the biggest stars for the New York Mets shined bright.

Pete Alonso launched a tiebreaking homer and Jacob deGrom pitched well enough to help save New York with a 7-3 victory over the San Diego Padres that evened their wild-card playoff series at one game apiece Saturday night.

“Win or go home,” deGrom said. “Love pitching here. Mets fans have been great to me. Didn’t want to disappoint.”

New York broke open the game by scoring four times in the bottom half, keyed by the bases-loaded double McNeil lined off Adrian Morejon through a drawn-in infield.

Seth Lugo retired cleanup batter Josh Bell on a grounder with the sacks full for the save, ending a game that took 4 hours, 13 minutes.

“It was a close game in the middle innings and then it got away from us there in the seventh,” San Diego manager Bob Melvin said.

The teams play a decisive Game 3 on Sunday night at Citi Field, with the winner advancing to a best-of-five NL Division Series against the top-seeded Los Angeles Dodgers beginning Tuesday.

Joe Musgrove is scheduled to start for his hometown Padres against 15-game winner Chris Bassitt.

“Go out there and compete and leave it all on the field,” San Diego slugger Manny Machado said. “At this point it’s all about 27 outs.”

Leadoff batter Brandon Nimmo had three hits and a walk for the Mets, including a go-ahead single in the fourth that chased wild starter Blake Snell to the delight of a boisterous sellout crowd waving orange rally towels.

The left-hander walked four of his first 12 batters and six in all over 3 1/3 shaky innings in his first postseason start for San Diego.

In a matchup between the 2018 Cy Young Award winners, deGrom struck out eight in six innings of two-run ball for his fourth career postseason win.

It was deGrom’s first playoff start at home — the right-hander helped pitch the Mets into the 2015 World Series, but all four of his starts that postseason came on the road.

“I actually felt like I had my best stuff in the sixth inning,” he said.

One night after co-ace Max Scherzer gave up four homers and seven runs in a Game 1 flop, deGrom came out firing 100 mph fastballs and delivered with New York facing elimination.

The two-time Cy Young Award winner, who plans to opt out of his contract after this season, whiffed Machado three times and rebounded nicely after going 0-3 with a 6.00 ERA in his final four regular-season outings.

Trent Grisham homered for the second time in two games, and San Diego tied it 2-all on Jurickson Profar’s RBI single in the fifth.

But after a visit from pitching coach Jeremy Hefner, deGrom struck out Machado and Bell with runners at the corners to end the inning.

“He’s one of the best in the game,” Machado said. “He did what he does best. We weren’t able to open the floodgates.”

Alonso homered on the first pitch in the bottom half from reliever Nick Martinez, who went to college in New York City at Fordham. It was the first career postseason homer for Alonso, who had 40 during the regular season and tied for the major league lead with 131 RBIs.

“This is why we play — for those moments,” Alonso said.

Díaz was summoned by manager Buck Showalter in the seventh — his earliest appearance since August 2020. Making the first postseason appearance of his career, the reliever turned in a tough defensive play covering first base and then retired slugger Juan Soto on a dribbler with a runner on second to end the inning.

Díaz went 46 minutes between pitches while the Mets rallied in the bottom half with the help of consecutive 10-pitch walks drawn by Alonso and Mark Canha against Morejon.

A pumped-up McNeil, the big league batting champion, pointed toward the New York dugout as he legged out his clutch double that made it 5-2. Eduardo Escobar added an RBI single off Pierce Johnson, and pinch-hitter Daniel Vogelbach had a sacrifice fly.

After getting two outs in the eighth, Díaz was lifted to a warm ovation and waved to the crowd of 42,156 as he walked off the mound.

With two on in the ninth, Profar hit a long drive that was caught just in front of the right-center fence. Adam Ottavino walked in a run before Showalter went to Lugo for the final out.

“We knew going into this game it was going to be tough,” Grisham said. “Any team that’s fighting for its life is going to come out guns blazing. We’re gonna be in the same situation tomorrow.”

Mets: RHP Taijuan Walker replaced left-handed reliever Joely Rodríguez (shoulder) on the series roster before the game, an injury substitution that needed to be approved by Major League Baseball. Rodríguez won’t be eligible to return unless the Mets reach the NL Championship Series. He did not pitch in Friday night’s 7-1 loss. … Slumping DH Darin Ruf returned from a neck strain and played his first game since Sept. 25. Ruf struck out, walked and was hit by a pitch.

Musgrove (10-7, 2.93 ERA) grew up a Padres fan in the San Diego suburbs and signed a $100 million, five-year contract with his hometown team this season.

Bassitt went 15-9 with a 3.42 ERA in his first season with the Mets after coming over in a trade with Oakland, where he pitched for Melvin.