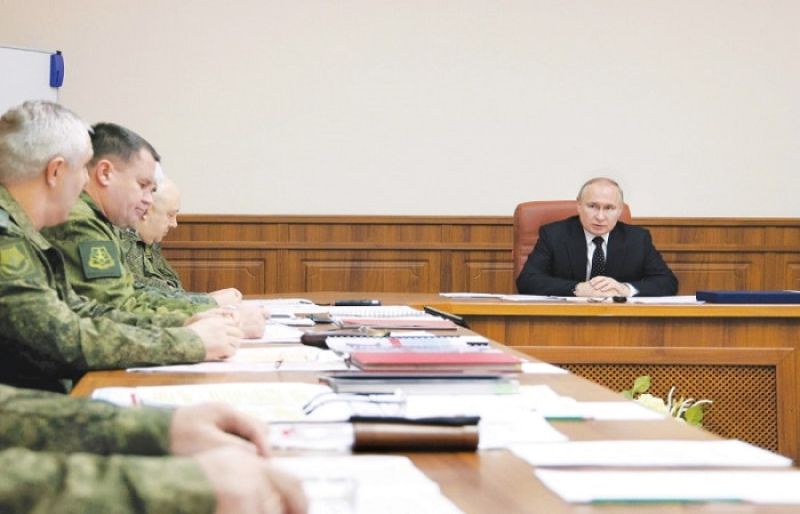 President Vladimir Putin has sought proposals from his armed forces commanders on how they think Russia’s military campaign in Ukraine should proceed, during a visit to the operation’s headquarters, the Kremlin said on Saturday.

A series of defeats in 10 months of fighting, resulting in Russian withdrawals from areas around the capital Kyiv and Ukraine’s second city Kharkiv and most recently from the city of Kherson, have forced Putin to call up reservists and generated rare public criticism from military bloggers and some allies.

Since the appointment in October of Air Force General Sergei Surovikin to lead the campaign, Russian ground forces have focused more on defence than attack, while waves of air strikes on cities have left millions of Ukrainian civilians without heat, light or water for days on end as winter sets in.

In video footage released by the Kremlin on Saturday, Putin presided at a meeting of around a dozen people at a circular table, flanked by Defence Minister Sergei Shoigu and Chief of General Staff Valery Gerasimov — both of whom have been heavily criticised by hawkish commentators.

Putin was then shown at the head of another conference table at the joint task force headquarters, inviting suggestions from a row of military commanders.

“We will listen to the commanders in each operational direction, and I would like to hear your proposals on our immediate and medium-term actions,” Putin said.

Surovikin was also shown attending the meetings in still photographs on the Kremlin website.

Putin spent the whole of Friday at the task force headquarters, his spokesman Dmitry Peskov told Interfax news agency. No other details of Putin’s visit or the location of the headquarters were reported.

Ukraine worked on Saturday to restore electricity and water supplies after Russia’s latest wave of attacks pitched multiple cities into darkness and forced people to endure sub-zero temperatures without heating or running water.

The volley of missiles unleashed came as President Vladimir Putin held extensive meetings with the military top brass overseeing Russia’s invasion of Ukraine, where Moscow has stepped up bombardments.

In the capital Kyiv, the metro had stopped running so that people wrapped in winter coats could take shelter at underground stations after air raid sirens rang out on Friday morning.

Kyiv mayor Vitali Klitschko said the metro service was relaunched early on Saturday and the water supply had been restored. However, a third of Kyiv residents were still without power, Klitschko added.

After a series of humiliating battlefield defeats, Russia since October has pursued an aerial onslaught against what Moscow says are military-linked facilities.

But France and the European Union have said the suffering inflicted on freezing civilians constitutes war crimes, with the bloc’s foreign policy chief calling the bombings “barbaric”.

Russia’s defence ministry said on Saturday the strikes targeted Ukraine’s military and energy facilities, while also disrupting “the transfer of weapons and ammunition of foreign production”. “All assigned targets were hit,” the ministry said in its daily briefing.

Russia fired 74 — mainly cruise — missiles on Friday, 60 of which were shot down by anti-aircraft defences, according to the Ukrainian army.